Two little boys with curly yellow hair and dark brown eyes, who apparently let their childish delight in pet ducks overrule a mother’s warning to stay in their own backyard, were drowned in the canal near the south end of Second Street yesterday afternoon.

The boys, William and Robert Martin, 2-year-old twin sons of Mr. and Mrs. Edward Charles Martin of 706 ½ South Pine Street, were found floating in the sluggish canal waters about an hour after their frantic mother had sounded a neighborhood alarm that her children were missing.

How the young twins managed to wander unnoticed from home, and what happened in the short interval between the time they were playing happily in the spring-like sunshine of their backyard and the time their bodies were discovered in the canal, nobody knew for certain.

Mrs. Martin, busy with her housework, left the youngsters in their large backyard with a firm warning.

“I told them, as I always do, not to go out of the yard under any circumstances,” she said.

At about 2:15 P. M. she called them to the house, gave them a drink of water and told them again to be sure and stay in the yard.

A few minutes later she went to the back door to see how they were getting along. The yard was empty.

“I hurried out into the alley,” she said, “They were nowhere to be seen.

I went back to the house, thinking they might have come inside and I didn’t notice them. But they weren’t there.

Alarmed when they failed to answer her calls and as further searching was to no avail, Mrs. Martin became panicky.

Her husband was out of town – he left Richmond a week ago in search of work in North and South Carolina – and she hardly knew where to turn. Until about three weeks ago, Mr. Martin was employed as a sheetmetal worker at Camp Lee.

As the twins failed to show up, Mrs. Martin rushed through the neighborhood asking friends and neighbors if they had seen the youngsters.

She thought about the two ducks, pets of the whole neighborhood, for which they boys had developed a great liking. She recalled how Bobbie and Billy delighted in chasing the ducks whenever they ran across them. Maybe the boys followed their feathered pets somewhere.

Shortly after 3 P. M. Mrs. Martin called police. Patrolmen Smith and Mills took up the search, aided by a group of some 75 neighbors.

Meanwhile, Harry Bailey of 208 South Third Street was walking across a footbridge over the canal near the Tredegar Iron Works, en route home from his work at a near-by plant. He noticed something in the canal.

“It looked like the foot of a doll floating on the water,” he said. He looked again, and as it floated nearer, he saw that it was the body of a child.

Bailey lifted the body from the canal. He called police. Detective Sergeants Kellan and Munson came to make an investigation.

A few minutes later Officers Smith and Mills arrived with Mrs. Martin. She identified the child as Robert.

The search turned to the canal, and about 30 minutes later William’s body was found caught in a grating where canal waters entered a plant – some 30 feet from the spot where Robert was located.

“I will always believe that Bobbie and Billy followed those ducks to the canal and fell in,” Mrs. Martin said last night.

Sergeant Kellan said it was his theory that the children wandered from their home, about two blocks from the canal, and accidentally stumbled into the canal. At the south end of the alley which runs back to the Martin home is a small park, running off into a steep hill down to the canal. It was through that the children may have lost their footing and rolled down the hill and into the water.

Mrs. Martin, grief-stricken over the loss of her only two children, last night was at the home of her mother, Mrs. T. P. Holt of 4208 Forest Hill Avenue. She had been unable to get in touch with her husband to notify him of the tragedy. He was due back in Richmond late this week.

Coroner Hamilton Scerer said he was satisfied the drownings were accidental.

The bodies were taken to Bennett Funeral Home. Arrangements for funeral services had not been completed last night. 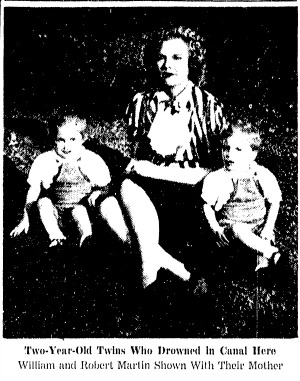